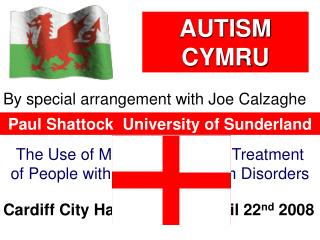 AUTISM CYMRU. By special arrangement with Joe Calzaghe. Paul Shattock University of Sunderland. The Use of Medications in the Treatment of People with Autism Spectrum Disorders. Cardiff City Hall, April 22 nd 2008. Autism Cymru - . when the theory needs to become practice gill williams 7/11/08. one besotted and frustrated mum v one

Voices for Change Cymru - . began in may 2008direct response to latest stage of devolution in wales provide services to

A PARAPROFESSIONAL’S Guide to Understanding Autism - Presented by vicki sandoval. a paraprofessional’s guide to

Art therapy for children with autism - . communication sense of self relationships sensory awareness. …we are totally

AUTISM - . chapter 12 this powerpoint includes additional information not found in your text. overview. what is autism?