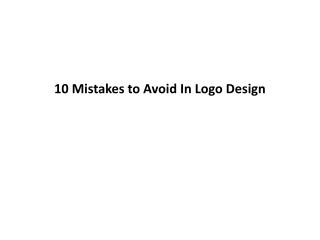 10 Mistakes to Avoid In Logo Design 10 Mistakes to Avoid In Logo Design

2017 Logo Design Trends | iMediadesigns - We are familiar with the fact that design trends vary year to year, logo design

Creative Branding and Identity Design - Branding is an important aspect for any business. the key to successful business

FUNERALS &amp; MEMORIALS - To insert your company logo on this slide from the insert menu select “picture” locate

LOGO - . logo design. the meaning of logos…. what does the fed ex logo mean? obviously it’s a shortening of the name

BG Spider Tutorial - . notes. 1. save a lot (possibly after each step in case you make any mistakes – there is no undo,

10 Most Expensive Tax Mistakes That Cost Business Owners Thousands - . conrad oertwig. #1: failing to plan. “ there is