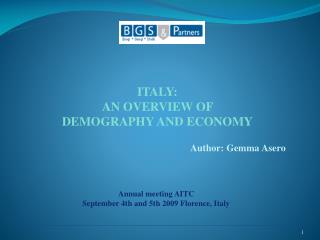 ITALY: AN OVERVIEW OF DEMOGRAPHY AND ECONOMY. Author: Gemma Asero Annual meeting AITC September 4th and 5th 2009 Florence, Italy. WHY. The purpose of this work is to offer an overview on Italian economy and demography since the end of Nineties to 2009. HOW. 29 th Annual Meeting - . coordonnateur pr maurice audran (angers). of the a merican s ociety for b one and m ineral r

PAMELA - The science and first r esults of the pamela s pace mission mirko boezio infn trieste, italy on behalf of the

The Easterlin paradox and the measurement of well-being - . “measuring subjective well-being: an opportunity for

Highlights from the 2009 NAQC Annual Survey of Quitlines - . prepared by: erdu, mignonne guy, jessie saul, and the naqc