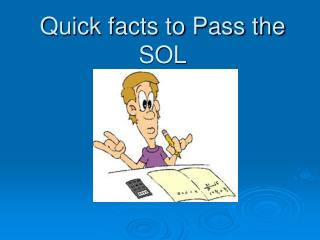 Quick facts to Pass the SOL Quick facts to Pass the SOL

AAYU's Eco-friendly Disposable High Density Burlap - Burlap are made from woven fabric which is from natural jute plant.

Le passé composé “être” - . starter: traduis. i ate a banana you watched tv we played football i sold a book (to

Water Facts - . ocean water is about 3x as salty as human blood. brackish water salt water. why is the ocean salty?.

La conditionnel passé - . how to use the conditional tense the stem and the endings some irregularities constructing

Pass The Peaches - . please (and thank you). preschool mealtimes. how pleasant and positive family-style meals in

15 Outrageous Facts About The Bottled Water Industry - . water used to be free. in fact, it still is -- at least in

Buddhism – Quick Facts - . one of the four largest religions in the world today with over 350 million followers

GREECE: The Quick Facts - . introduction this short presentation is intended to give a few facts about the country where

8 Love never ends. As for prophecies, they will pass away; as for tongues, they will cease; as for knowledge, it will

Water The Wonder Liquid - By healmor

Quick Review and a couple new facts!! - . colonial america. review!!!. columbus was italian but he sailed for spain