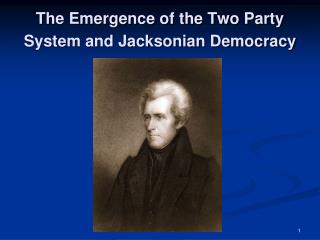 The Emergence of the Two Party System and Jacksonian Democracy The Emergence of the Two Party System and Jacksonian Democracy. The Election of 1824. Republican Party: the only party in operation prior to the 1824 election Several Republican factions put up their own candidates for the Presidency

The Emergence of the Two Party System and Jacksonian Democracy

POLITICAL PARTIES - . party components. party in the electorate citizens who psychologically identify with a political

Democracy - . a multidimensional concept. the government component. a society’s “government” refers to the

Political Party: - . an organized group of people with common values and beliefs who try to get their candidates elected

Alexis de Tocqueville and the Age of Jackson - . june 15, 2011. a plan for the morning. 1) contexts for tocqueville’s