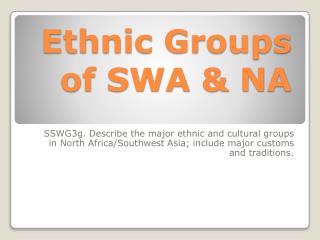 Ethnic Groups of SWA & NA. SSWG3g . Describe the major ethnic and cultural groups in North Africa/Southwest Asia; include major customs and traditions. . Arabs are the primary ethnic group of SWA & NA Arabs’ religion is primarily Muslim, but there are Jewish & Christian Arabs as well.

Religious and Ethnic Groups of Africa - . ss7g4 the student will describe the diverse cultures of the people who live in

African ethnic groups and their Religions, Customs, and Traditions - Africa is made up of many different countries and

Arabs, bantu,swahili, and Ashanti - . by carlee lennon, and nyasia lazarus. a rabs. in 640 arab force invaded egypt ,then

Africa: Culture and Ethnic Groups - . sswg4g. describe the ethnic and religious groups in sub-saharan africa; include

Swahili Swa-hi-li (no prefixes or suffixes) Swahili refers both to a language and a people group. - Swahili swa-hi-li (no

Ethnic Groups of the Middle East - . ethnicity vs. religious group. what is the difference between an ethnic group and a

What modern day country is the home to those who call themselves the Persians? - . iran. what is the religion of most