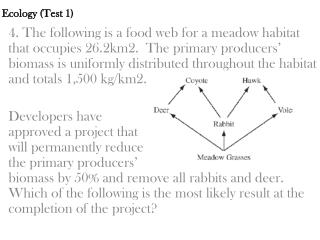 Ecology (Test 1). 4. The following is a food web for a meadow habitat that occupies 26.2km2. The primary producers’ biomass is uniformly distributed throughout the habitat and totals 1,500 kg/km2.

Neo-Evolutionism and Cultural Ecology - . a major theoretical shift occurred in american anthropology in the late 1940s

AN INTRODUCTION TO INDUSTRIAL ECOLOGY - . a2.3sr1 studies in sustainability 1. overview. what is ‘industrial ecology’

Ecology - . what is ecology?. ecology- the scientific study of interactions between organisms and their environments,

Ecology - . the first law of ecology is that everything is related to everything else. ~ barry commoner. warm-up. do

Interspecific Interactions - . reading: freeman, chapter 49. the niche. the niche is one of the most important concepts

Welcome to the UCI School of Social Ecology - . orientation for freshmen 2010 - 2011 presented by the school of social

Ecosystem Ecology - . ecosystem ecology is. “organisms in the ecosystem regulating the capture and expenditure of

Science 421 - . ecology the study of the interaction of living things &amp; their environment what else does it mean

2017 Science Olympiad Official Ecology Presentation - This basically covers the same things in my videos, but it's more