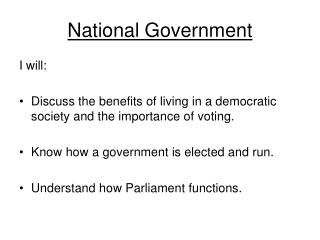 National Government. I will: Discuss the benefits of living in a democratic society and the importance of voting. Know how a government is elected and run. Understand how Parliament functions. . Can you match the name, the face and the political party?. Ming Campbell. Tony Blair.