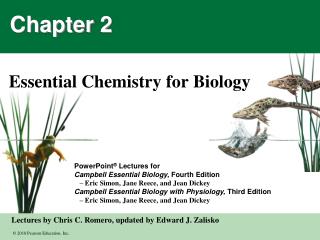 Chapter 2. 0. Essential Chemistry for Biology. Matter: Elements and Compounds. Matter is anything that occupies space and has mass. Matter is found on the Earth in three physical states: Solid Liquid Gas Matter is composed of chemical elements.