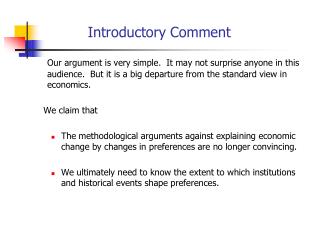 Introductory Comment. Our argument is very simple. It may not surprise anyone in this audience. But it is a big departure from the standard view in economics. We claim that The methodological arguments against explaining economic change by changes in preferences are no longer convincing.

DLHE introductory - . september 2012. objectives. find out about hesa who are we what do we do learn about the

Some comments - . vertical exaggeration. on all the profiles you ’ ve drawn the vertical and horizontal scales are not