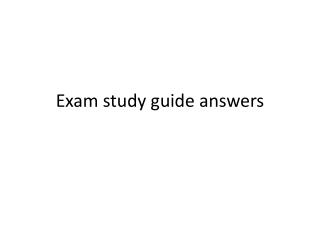 Exam study guide answers. Exam answer Key. 1. Diocletian: Restored order in the empire & increased its strength Governed as an absolute ruler Severely limited personal freedoms Viewed Christianity as a threat He believed that the empire had grown too

Cima C03 question papers and answers - Want to get certified cima c03? no need to worry about your exam. get help from

70-410 Exam Questions Answers - Want to get microsoft 70-410 certified? get help with exams4sure study guide for acams

CHAPTER 6 &amp; 7 ANSWERS STUDY GUIDE - . you can work with me on the study guide or you can study on your own. i

Creative Writing Final Exam Study Guide - . 1. acrostic. a p oem or a series of lines in which certain letters, for

1 st 9 Week Study Guide Answers - . scientific method. a hypothesis is a possible explanation or answer to the question