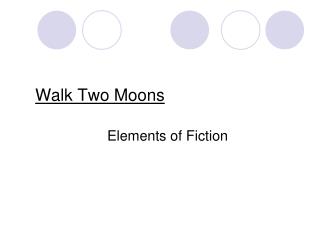 Walk Two Moons. Elements of Fiction. Character. A character   is a person, animal, or imaginary creature that takes part in the action of a story. An author develops a character by describing: physical appearance speech, behavior, and actions thoughts and feelings

les verbes -er - . in the english present tense, the verb makes only one change in its form. ex. to walk i walk you walk

How many moons does each planet have?

Walk Two Moons - . chapters 9-16 journaling and activities . describe the main events in each of the stories the novel

Walk Two Moons - . student interpretation through artistic creation. “it’s okay to be part of someone else’s

Jupiter’s Moons - . jupiter’s moons. the four galilean moons of jupiter, in order of increasing distance from

Moons - . moons. moons. many moons in our solar system they have craters , volcanoes, possibly underground oceans. a

… your walk alongside these students has taught them how to walk and by your example where to walk. These footprint