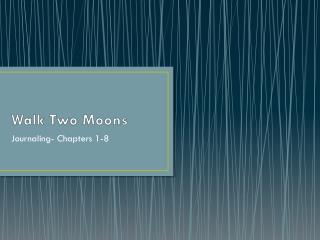 Walk Two Moons . Journaling- Chapters 1-8 . Think of a time when you took a long trip by car or bus…. What was the purpose of the trip? How did you pass the time? Punctuation, Grammar, and Usage Exam Review - . fatima prefers to walk to market, while i would rather go by helicopter.

A Look At - . tidal wetlands. marsh profile. let’s take a walk into a local salt marsh. we’ll enter by water and walk

Circular motion - . have you ever been to an amusement park?. fig. 05.19. why somebody needs to know about circular

Space Facts - . section b – the planets. mercury. closest planet to the sun takes the least amount of time to orbit the

ASTEROIDS - . objects orbiting the sun – not volatile enough to be classed as comet too small to be planets (&lt;