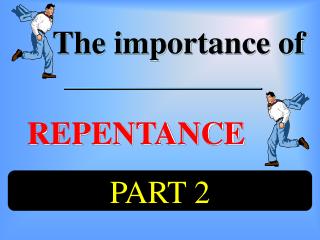 The importance of. REPENTANCE. PART 2. ALSO IN THE NEW TESTAMENT. LET US LOOK AT SOME WHO TAUGHT REPENTANCE. Mark 1:4 John the Baptist burst onto the scene- denouncing SIN- and calling on the people to repent. preaching a BAPTISM OF REPENTANCE -for forgiveness of sins. The Importance of Marine Wildlife and the Human I mpact - . abera , brandon, jerry, parmin , parminder , shreya ,

DNA sequencing: Importance - . the dna sequences making up any organism comprise the basic blueprint for that organism.

The Importance Of Home Visits - . michael.brown@reconstruct.co.uk. improving. …the lives of vulnerable people.