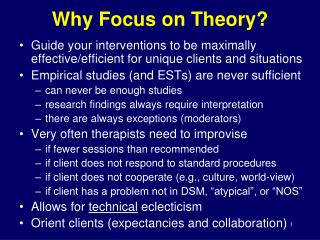 Why Focus on Theory? Why Focus on Theory?. Guide your interventions to be maximally effective/efficient for unique clients and situations Empirical studies (and ESTs) are never sufficient can never be enough studies research findings always require interpretation there are always exceptions (moderators)

Why Focus on Theory?