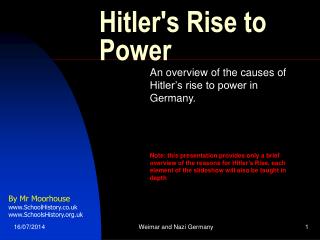 Hitler's Rise to Power. An overview of the causes of Hitler’s rise to power in Germany. Note: this presentation provides only a brief overview of the reasons for Hitler’s Rise, each element of the slideshow will also be taught in depth.

Hitler’s rise to power - . hitler rose to power after world war one. hitler was a powerful speaker who got the

Rise to power and dictatorship - Lesson 2: we will learn how hitler gained full power in germany and violated the treaty

Hitler’s Rise to Power - . goal of today. at the end of this lesson you should be able to: identify and explain a

Hitler and the Rise of Nazi Germany - . objective 1: identify the reasons for hitler’s rise to power in germany.

The Rise of Hitler in Germany - . born 1889: austria came from an abusive alcoholic father, lost brother and sister.

HITLER and the RISE of NAZI Germany - . ?? what you should know ??. from where was hitler born? name the party led by

The Rise of Hitler and the Nazi Party - . adolf hitler’s early life. hitler was born on april 20 th , 1889 in austria

Hitler’s Rise to Power - . what was hitler’s early life like. born to alois and klara hitler in austria. mother dies

The Rise of Hitler and the Nazi Party - . although hitler became the chancellor of germany in 1933 he was only the leader

Hitler’s Rise to Power - . the weimar republic. the kaiser abdicated in 1919 leaving germany to be governed by the