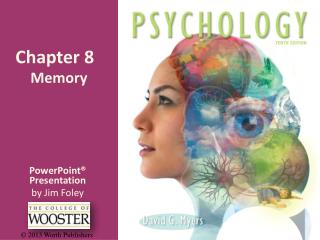 Chapter 8. Memory. PowerPoint® Presentation by Jim Foley. © 2013 Worth Publishers . How Does Memory Work? An Information-Processing Model. Here is a simplified description of how memory works:. Encoding. Encoding: the information gets into our brains in a way that allows it to be stored Foley Catheters and the Risk for Infection - . by:  corrin fesko, rn &amp;  sarah waronek, rn. at the completion of

The Four Kinds of Sentences A PowerPoint Presentation Created by: Mrs. Perry - . let’s start with the declarative

History of Photography - . name in creating your powerpoint presentation you have been marked on: 1. your depth of

Welcome To Pastor Garry Clark’s PowerPoint presentation from the October 1 st sermon: THE LAST DAYS: Signs Of The