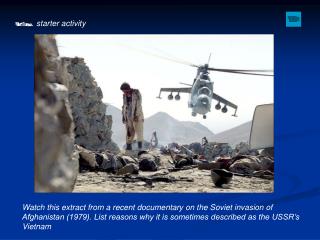  starter activity. Watch this extract from a recent documentary on the Soviet invasion of Afghanistan (1979). List reasons why it is sometimes described as the USSR’s Vietnam. USSR’s Vietnam. Soviet military lost the media war Became embroiled in a civil war Conscript army Clash of cultures The Vietnam Conflict: - . in too deep. early history.

The 1970s - . the events that shaped the decade. domestic and world events. what in the world made us so cynical?. the