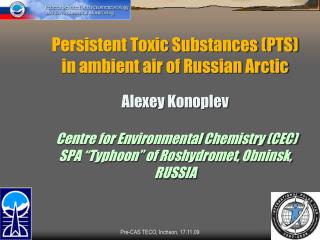 Persistent Toxic Substances (PTS) in ambient air of Russian Arctic Alexey Konoplev Centre for Environmental Chemistry (CEC) SPA “Typhoon” of Roshydromet, Obninsk, RUSSIA. OUTLINE. What are PTS and why in the Arctic? International Treaties in the field of PTS and the environment.