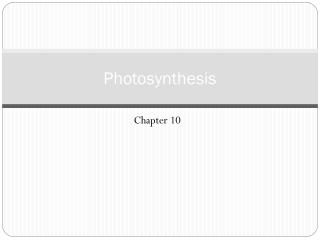 Photosynthesis. Chapter 10. Photosynthesis as a Redox Process. Respiration is an exergonic redox process Energy is released from the oxidation of sugar The electrons associated with the sugar’s hydrogens, lose potential energy as the carriers transport them to oxygen. PHOTOSYNTHESIS - . using light to make food. photosynthesis is the most important chemical process on earth because:. it

How can we show that plants use carbon dioxide in photosynthesis? - . hydrogencarbonate indicator. decreasing co 2 in

Wake-up - . explain the difference between a plant cell and an animal cell. write down the summative formula for both

PHOTOSYNTHESIS - . review question. which mode of nutrition do the green plants carry out?. a. autotrophic nutrition.

PLANTS - . how are plants all alike?. plant characteristics. multicellular autotrophic (photosynthesis) chlorophylls a

Chapter 8 Photosynthesis Dr. Joseph Silver - . this chapter deals with 1. what is photosynthesis 2. discovery of

MR. BRINKMAN’S POWERPOINT FOR THE TREES AND PLANTS OF KENTUCKY - . plant cells. major differences that plant cells have

I. INTRODUCTION - Chapter 7 photosynthesis. i.