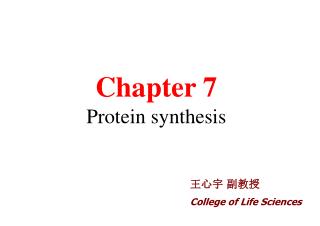 Chapter 7 - . alkenes and alkynes i: properties and synthesis. elimination reactions of alkyl halides. about the authors.

Chapter 7. Alkenes: Reactions and Synthesis - . diverse reactions of alkenes. alkenes react with many electrophiles to

Single Cell Protein - . single cell protein is a protein extracted from cultured algae, yeasts, or bacteria and used as a

Chapter 11 DNA and Protein Synthesis - . mrs. svencer. 11.1 genes are made of dna. frederick and griffith transformation

Chapter 12-3: RNA and Protein Synthesis - . what is a gene?. a gene is a set of dna instructions that control the