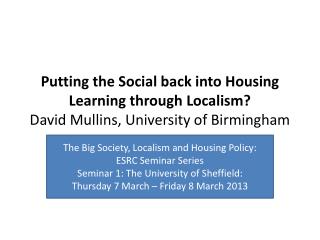 A Housing Policy F.I.T for the Big Society Co-producing a believable policy story - “ they are not normal”.

Modern Society &amp; the Economics of Happiness Andrew Oswald October 2011 - I would like to acknowledge research