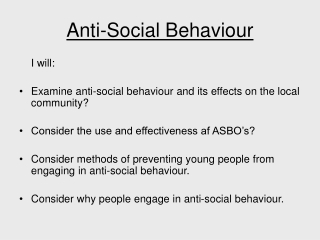 Social Marketing &amp; Behaviour Change July 14 th , 2011 - . aim of the session. provide an introduction to the

The Swansea Family Intervention Project FIP - What is a fip?. fip is a dedicated scheme that works with families of

Social Behaviour - . learning outcomes to know definitions of and reasons for altruism and kin selection, social

Explanations of crime - . the self-fulfilling prophecy. you must be able to describe and evaluate both social learning

Challenging and anti-social behaviour - . unit 14. what is challenging behaviour?. all children display unwanted

PRO-SOCIAL AND ANTI-SOCIAL BEHAVIOUR - . unit 2 – aos 1. social relationship – is used to describe the connection or