What Government Does - PowerPoint PPT Presentation 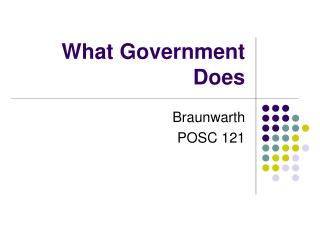 What Government Does. Braunwarth POSC 121. Pre-Course Questions for Consideration. Please write out an honest response for each of the following questions: When I think of U.S. Government, I think of… What do I personally hope to get out of this course?

An Introduction to Government in America - . the problems. our meaning of government…. government is an institution

Branches of Government - . ss3cg1 the student will explain the importance of the basic principles that provide the

Forms of Government - . “democracy is the worst form of government, except for all the others” . classifying

Government Review - . ss6cg4 the student will compare and contrast various forms of government. describe the ways

Governments - . have basic principles that affect the way it serves its people. who holds all the power do you have all