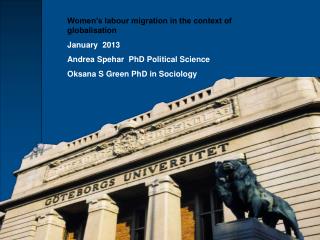 WHO Partograph - . partograph. a partograph is a graphical record of the observations made of a women in labour for

Unfair labour practices – challenges and solutions - . by sean molony . overview. the provisions of the lra ulps

Employability - . revision and support notes. the impact of globalisation on employment. what is

DEPARTMENT OF LABOUR PRESENTATION TO THE PORTFOLIO COMMITTEE ON LABOUR - Workshop on budget review. 02 july 2014. 1.

Compounding Trauma: The systemic abuse of women and children - . findings from 'no way to live:’ women's experiences of

„Diagnosis of the situation of women remaining outside the labour market in Podlaskie province” - . research period: