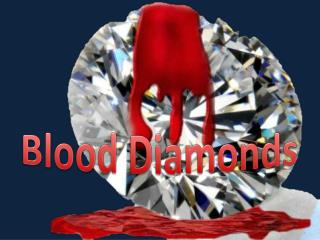 Blood Diamonds. Just Another Form of Carbon?. The Ancient Greeks thought diamonds were splinters of stars fallen to earth 75-120 miles below earth ’ s surface, extreme heat and pressure cause carbon atoms to crystallize BLOOD DIAMONDS - . diamonds symbolize wealth, love, and grace around the world in several african nations they have been

Blood Diamonds - . by: kevork boyadjian danny ward. the start. the start of the these killings and the illicit diamonds

Blood Diamonds - . mines. this is a picture of a diamond found in s ierra leone, they work all days in mines like these

BLOOD DIAMONDS - . why do we value diamonds so much?. diamonds symbolize wealth, love, and grace around the world in

Conflict/Blood Diamonds - . in africa. diamonds. how are diamonds formed ? diamonds take 3 billion years to make what are

Blood Diamonds in Liberia - . by: olena yousif and peter kim.

Blood Diamonds in Zimbabwe - . by antonette puleo and rasheed haddad.

How are diamonds mined in Africa and why do they call them “blood diamonds?” - . by: ben , rohan , taylor . intro. we