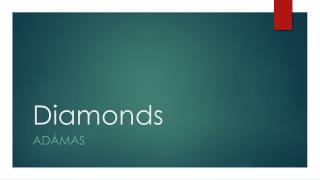 Diamonds. Adámas. What are diamonds. The word Diamond comes from the Greek word Adamas , which means indestructible. It is the only gem known to man that is made of a single element, Carbon, besides graphite. Diamond is completely made of Carbon atoms crystallized in a cubic arrangement. DIAMONDS - . structures and property of diamond