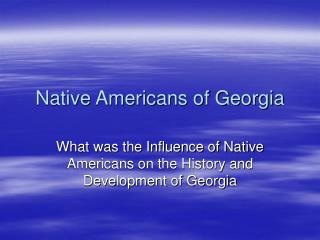 Geography of Georgia - . review. which statement describes georgia ’ s relative location? a. georgia is a

Go Native! - . get the most from your arbortext editor investment with native fosi. suzanne napoleon www. fosiexpert.com.

IROQUOIS INDIANS - . teaching american history. inez cutler. h0w did native americans come to the forest? . what do you