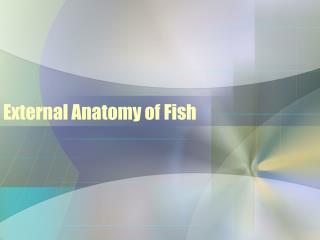 Anatomy of Fish - . what makes a fish a fish?. things you will learn. fish breathe through gills. fish have fins to help

Fish Anatomy - . fish and their environment. fish have many vital organs that enable them to live underwater. . a

External Anatomy of the Shark - . lab: 35-1. how is a shark different from bony fish?. the main difference between the