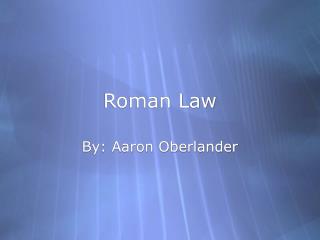 Roman Law. By: Aaron Oberlander. The First Roman Law. Before the Twelve Tables were used in 451B.C. through 387B.C. when they were destroyed by the Celts, the only law used was the Roman civil law. This law applied only to Roman citizens, was undeveloped, and was used with religion.

The Roman Legions - . legion. legions were made up of 5,000 soldiers a solider was called a legionary all roman citizens

The Roman - . by eve. roman army. the roman army was made up of groups of soldiers their were five weapons a sword shield

The Romans - . by kieron rowley and billy. mosaic. this a roman mosaic called gorgan . romans. this is a roman wearing

Roman Art and Culture - . overview. the roman civilization came to dominate the western world at its height, the roman

Fall of the Roman Republic - . discontent with roman republic . widening gap between patricians and plebeians issue of

The Rise and Fall of the Roman Empire - . © student handouts, inc. www.studenthandouts.com. what was the roman empire?.