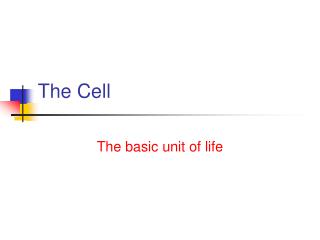 The Cell. The basic unit of life. Cell History. The study of cells is called cytology. Robert Hooke was the first scientist to use the word cell. Robert Brown discovered the nucleus in 1833. Theodor Schwann discovered that animals were made of cells in 1838. Cell Theory. The Cell: Discovery of the Cell - . the first person to see cells was robert hooke in 1665. he was looking at a thin

The Cell - . by: heath roland. the nucleus is like a brain, the nucleus controls the cell almost like the brain controls

The Cell - . definition of cell note: only write down text in red. a cell is the smallest unit that is capable of

The Cell - . tiffany stephens. a cell is like a school because a school has many different parts to keep it running

The Cell - . why are cells so small? why can ’ t they be as huge as an hippo?. what limits cell size?. surface to

The CELL - . a cell is like a phone… . the nucleus is like a circuit board because the base of the phone. . the cell

The Cell - . the cell is the smallest unit of matter that can carry on all the processes of life . . anton von

The Cell - . fourth grade. teaching message 1: all living things are made up of building blocks called cells. all living

The Cell - . movement through the cell. passive transport – no energy required diffusion – region of high

The Cell - . smallest unit of all living things composed of organelles each organelle performs specific jobs so the cell

The cell - . biology 11 advanced. the cell theory. all living things are composed of one or more cells. cells are the