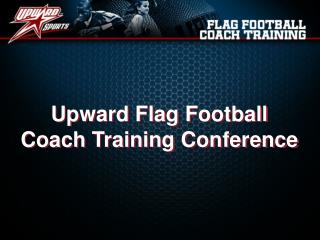 Youth Football Tournaments At SFA Now - Youth football tournaments have begun to crop up in their numbers in the city,

Upward Cheerleading Coach Training Conference - . what we will cover at this training. primary responsibilities of an

Proper Football Tackle form - . ages : 5 and up objective: teach youth how to tackle with proper form. by: ryan patrick.

FLAG FOOTBALL - . general rules. the field of play. position descriptions. quarterback (qb) - the quarterback is the

HT Football - . welcome. welcome &amp; thank you. thank you for attending tonight thank you in advance for your