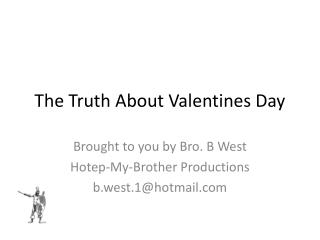 The Truth About Valentines Day The Truth About Valentines Day. Brought to you by Bro. B West Hotep -My-Brother Productions b.west.1@hotmail.com. Objectives. To discuss the following topics The Lupercalia The story of Romulus & Remus Lupercus (Roman god of fertility, agriculture, and shepherds) Month of February

The Truth About Valentines Day

Truth or Dogma? - . an overview of the hydroplate theory dr. walt brown www.creationscience.com. truth or dogma?.

The Truth about Cholesterol - . one of the most maligned of all nutrients is cholesterol . even sodium is not so greatly

What is TRUTH? - . truth. that which has fidelity to the original. what is fidelity?. fidelity. the same as or

How To Defend Your Faith - . dr. heinz lycklama heinz@osta.com www.osta.com/messages. defending your faith. roadblocks to

Putting the logic into logic programming … - Truth-telling vs. lying?. one is a knight – who always tells the truth.

The Truth About The Ten Commandments - . wamwara@gmail.com. freedom comes from understanding who you are… …man know

Predicate Logic - . truth-table reminders. the problem people had the most trouble with was 1e: construct a truth-table

Six Pillars of Character - . can you name all six?. http://www.ihs.org/images/innovation/charactercounts_web.jpg. 1.

The Truth About Easter - . hotep-my-brother inc. bro. wamwara. outline. history and origin of the word easter how the

Truth about Fad Diets - . obesity, health and the student. goals. determine how to assess obesity and additional medical