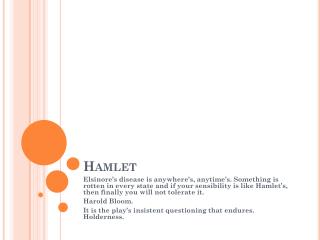 Hamlet. Elsinore’s disease is anywhere’s, anytime’s. Something is rotten in every state and if your sensibility is like Hamlet’s, then finally you will not tolerate it. Harold Bloom. It is the play’s insistent questioning that endures. Holderness. 3.2 .