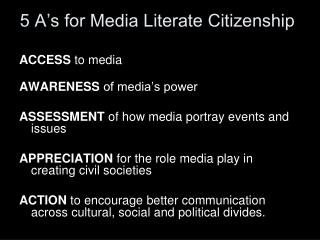 Citizenship in the Nation Merit Badge - . merit badge requirements. this merit badge is required to earn the eagle scout

Year 9 Persuasive Media - . what is media?. can you write your own definition of media? don’t forget to include a

Unit I: Citizenship - . part 1: what is an american citizen. civics. the study of the rights and duties of citizens. what

A Framework for Empowerment, Engagement, and Active Citizenship in an Information Age - The 5 a’s of media literacy.