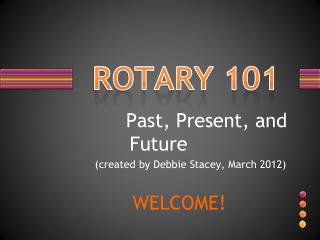 ROTARY 101. Past, Present, and Future (created by Debbie Stacey, March 2012) WELCOME!. Rotary 101 includes:. Rotary history & timeline H ow Rotary has evolved Current Rotary facts Rotary plans for the future What is Rotary, what it means to be a Rotarian What Rotarians do

Rotary Fellowships - . “fellowship is wonderful; it illuminates life’s pathway, spreads good cheer, and is worth high

Rotary 101 - . how to organize a service project. a worldwide organization more than 1.2 million business, professional,

Rotary 101… What’s that all about? - . so you are about to be club president?. history programs terminology

Rotary 101 - . new members. plan for presentation. how to find new members engage the community how to propose a new

Rotary Foundation - . an overview. introduction ??. rotary and our club. today, rotary has ~1.2 million members over

Rotary 101… What’s that all about? - . so you’re about to be president?. history programs terminology