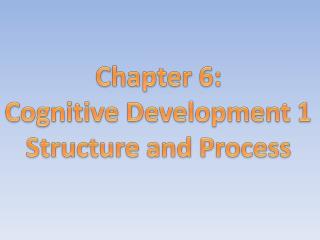 Chapter 6: Cognitive Development 1 Structure and Process. Piaget’s Basic Ideas. How does the child’s knowledge change with age? Central assumption: the child is an active participant in the development of knowledge, constructing his own understanding. Schemes . The Programmer - Keynote presented at sdd (12th may 2015) somewhere in the heart of a development process, essential to

Understanding and Applying Theories of Career Development - . chapter 2. questions to ask about theories. how well does

Human Development - . ap psychology. what is covered in this chapter?. describe the physical development of infants and

Chapter 1 - . the learning process. learning a change in behavior as a result of experience. learning theory. learning