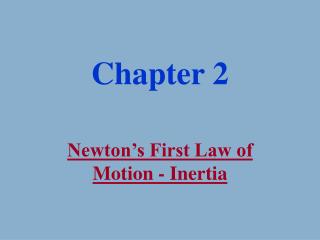 Chapter 2. Newton’s First Law of Motion - Inertia. Stationary Earth. Earth is heavy Easier to imagine the sky can move It looks like the sky is moving We have no sensation of our motion Rotating Earth would make objects fly off of the surface Stellar Parallax. June.

NET - 01. the overall force on an object after all the forces are added together is called the ___ force. net. 02.