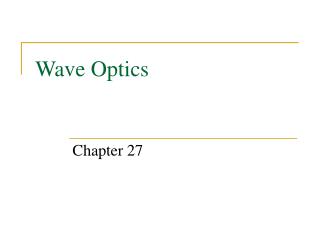 OPTICS - . reflection and refraction. chapter 35. geometrical optics. optics is the study of the behavior of light (not

Light, optics and colour - . sources of light. the sun – the main source of light on earth the moon – this is

Wave Optics (Coincides with Ch. 22 in the book) - . christian huygens (xvii century) based on his observations of waves

Nature of light and theories about it - . fourier optics falls under wave optics provides a description of propagation of

Light and Optics - . chapters 22 and 23 by aaron jones. introduction and reflection. light is recognized as having the

What is a WAVE? - . wave measurements. anatomy of a wave. waves and energy. waves transmit energy. which measurement is

Interference and Diffraction - . wave optics. the wave nature of light is needed to explain various phenomena

L 32 Light and Optics-4 - . up to now we have been studying geometric optics today we will look at effects related to the

Chapter 22. Wave Optics - . light is an electromagnetic wave. the interference of light waves produces the colors