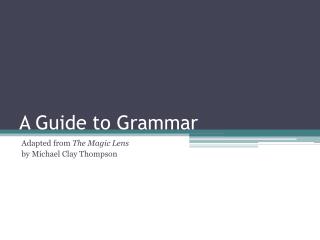 A Guide to Grammar A Guide to Grammar. Adapted from The Magic Lens by Michael Clay Thompson. Verbs. Verbs. Verbs have three functions: They link the subject of a sentence to a description (subject complement). They show action. They help other verbs. Regular vs. Irregular.

A Guide to Grammar

A Guide to Paragraph Writing - . what is a paragraph?. a paragraph usually contains a general idea in one sentence, and 4

The Magic Lens - . introduction to grammar. grammar. a way of thinking about language. grammar. . . . lets us think about

Grammar Warm-Ups with “This I Believe” statements - . adapted from laying the foundation, grade ten and the capital Our suggestions of grammar teaching - . 1. input (exposure to grammar) a. reading b. listening 2. language focus A Guide to Grammar - . adapted from the magic lens by michael clay thompson. adverbs. adverbs. an adverb is a word that

A Guide to Grammar - . adapted from the magic lens by michael clay thompson. nouns. nouns. nouns are the names that give

Grammar Guide Spanish B - . a review of what we learned last year. gustar. gustar is used to talk about what one likes to

The Garden of Phrases - . image from the guide to grammar and writing , sponsored by the capital community college

Get Easy Guide To Improve Your English Conversation - Learn advanced english conversations, to improve your english

Introduction to Grammar, continued… - . adverbs. adverbs describe and modify or change other words, just as adjectives

Grammar!!! - . are grammar lessons enough?. a solid body of scholarly research has demonstrated that knowledge of grammar