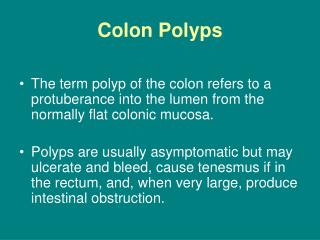 Colon Polyps. The term polyp of the colon refers to a protuberance into the lumen from the normally flat colonic mucosa. Polyps are usually asymptomatic but may ulcerate and bleed, cause tenesmus if in the rectum, and, when very large, produce intestinal obstruction. Colon Polyps. Colon Polyps - . the term polyp of the colon refers to a protuberance into the lumen from the normally flat colonic

Most Common Types of Colon Polyps - A polyp is a non-cancerous growth found on mucous membranes, including those found in

Finding and removing polyps in the large bowel (colon) can prevent colon cancer. - All items have response choices true,

Nasal polyps - . nasal polyps are grape like growths of the skin mucosa that project into the cavities of the nose and

Yellow Colonial Polyps - . parazoanthus gracilis. what is a yellow colonial polyp ?. anemone in the wild, these polyps

GALL BLADDER POLYPS - . dr.thomas joseph. gb polyp is the term used to describe any mucosal projection into the lumen of

Colon, Semi-Colon or Dash? - . what do you know about these three punctuation marks? tell your partner. : a colon can