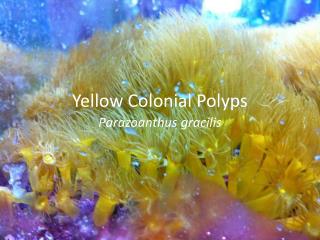 Yellow Colonial Polyps. Parazoanthus gracilis. What is a Yellow Colonial Polyp ?. Anemone In the wild, these polyps can be found in the tropical Western Pacific Ocean where there is moderate light and water movement long thin tentacles attached to a fluted body

Cnidarians - . “ the guys with the stinging tentacles ”. all about cnidarians. evolution of multicellular animals

Biome Book - . directions: 1. use page 99 of the prentice hall biology book and color code the biomes of the world (pg 2

Tentacles - . by: roland smith &amp;brandon conwright . tentacles. quote: “you shore that rusty bucket of bolts can

The Chemistry OF Coral Bleaching - . what is a coral?. corals are marine invertebrates (animals) they can take many