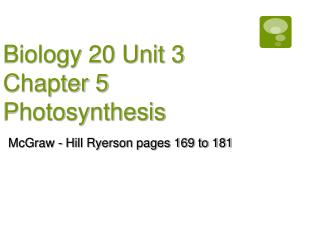 Biology 20 Unit 3 Chapter 5 Photosynthesis. McGraw - Hill Ryerson pages 169 to 181. Photosynthesis. A process that converts solar energy into chemical energy Mean ‘Light” and “to make or build”. Occurs in all plants, some algae, some bacteria, some protists. light. Chapter 5 Photosynthesis - . 5-1 nrg and living things. where does the nrg we use come from. directly or indirectly from

AP BIOLOGY Chapter 10 Photosynthesis - . name the enzyme that catalyzes the fixation of carbon onto rubp in calvin cycle

BIOLOGY UNIT 3 - . principles of communication. production of a signal detection of the signal transfer or transduction

BIOLOGY UNIT 3 - . what is a disease?. any condition that interferes with how an organism, or any part of it, functions.

Study Guide Photosynthesis Unit, Biology Standard 1f - . 1. what process is shown in the figure to the right?. 1. what

Biology 1010 Chapter 20 - . bryophytes. bryophytes. what are they?? where are they found?? what is their evolutionary

BIOLOGY – CHAPTER 20-21 - . i. communities and survival:. a. limiting factors: any abiotic or biotic that restricts the

GCSE Biology unit 3 - . mycoprotein. which pairs of pictures go together and why? what is the connection between all 4

Biology Chapter 3 - . notes #3. native vs. introduced. native species are plants and animals that naturally inhabit an