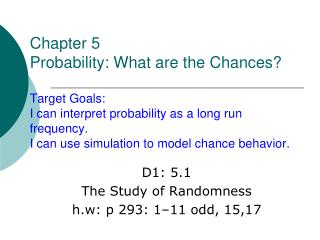 Chapter 5 Probability: What are the Chances? Target Goals: I can interpret probability as a long run frequency. I can use simulation to model chance behavior. D1: 5.1 The Study of Randomness h.w: p 293: 1–11 odd, 15,17. Randomness & Probability Models. Random?

Study aim - . to explore remediable factors in the processes of care for patients who died within 96 hours of admission

Hazard and Operability Study ( HAZOP) - . i suppose that i should have done that hazop study!. introduction to hazop -

Deterministic Chaos - . caoz. phys 306/638 university of delaware. chaos vs. randomness. do not confuse chaotic with