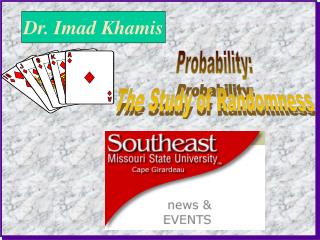 Dr. Imad Khamis. Probability: The Study of Randomness. OBJECTIVES. To define the term probability. To discuss the classical, the relative frequency, and the subjective approaches to probability. To understand the terms experiment, event, and outcome.

Dr. Imad Kutum - Is the founder and president of kutum & associates inc. he is a business professional with more

Imad Kutum - Dr. imad kutum is a business professional with more than 20 years of experience in business management

Fr. Imad Twal General Director- Jordan - How did jesus of nazareth confront violence in his day?. how is this relevant in

Can the use of “WHO Surgical safety checklist” Save lives? Gathering Evidence. Dr Khamis Elessi - Can the use of