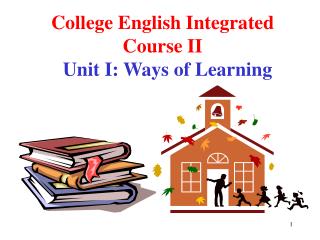 College English Integrated Course II Unit I: Ways of Learning. I. Objectives of Teaching in This Unit. 1. Find out the differences between Chinese and Western attitudes toward learning. 2. Grasp the main idea and the structure of the text; Unit 7 - . departure. about the author. nahid rachlin , born in iran, came to the united states to attend college and

English at Leisure - . unit one shopping your objectives at the end of this unit you should be able to :. - - --

An Integrated English Course Book 4 - . unit nine the discus thrower. general understanding of text i. what do you know

Unit 2 Myths and Legends - . part i. teaching aims. in this unit students are required to : 1) get to know some useful

Unit Reflection - . does your grade reflect your learning? why or why not? what is working? what can mr. clifford do to