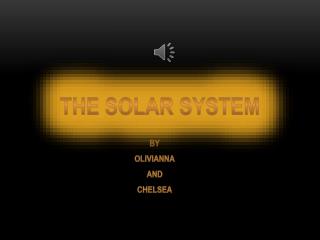 The solar system. BY OLIVIANNA AND CHELSEA. SUMMARY OF LESSON. Also by Olivianna and Chelsea, though we don’t know why you would think otherwise. This is the solar system. Jupiter. Mars. This is a diagram of the sun we DO NOT completely understand the words in the diagram. . mercury.

Gravity &amp; Orbits - That’s the trouble with science. you’ve got a bunch of empiricists trying to describe

The Solar System - . december 13, 2010. warm up (review). what determines the composition of a mineral? what is cleavage?

Asteroids, Comets and Meteorites - . important points. small objects in the solar system are leftovers that never

The Solar System - . the milky way galaxy. our solar system is part of a family of stars called a “galaxy.” our