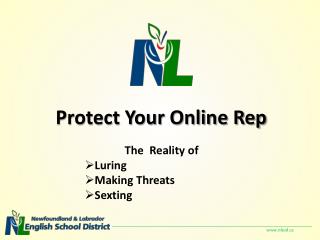 Protect Your Online Rep. The Reality of Luring Making Threats Sexting. Connection. Online Reality. Teens send and receive an average of 3,853 texts per month. Experian Marketing Services 2013. You Can Be Anyone Online. Predators Do This as well. Protect Your Online Privacy with DeleteMe - Deleteme is a pioneer in online privacy protection. they make hassle-free

Protect Your Children from Online Internet - Most of the people fall down in using the online internet. the children are

How To Protect Your Privacy Online? - A lot of people are worried about their private information on the internet. online

Protect Yourself Online - With how easily personal information can be gotten and shared in the world, it is a good idea

How to Protect Your Intellectual Property Online? - Intellectual property (ip) is the lifeblood of almost everyone,

How to Protect Your Brand Online Reputation? - Www.ripoffreportremovalhelp.com - a brand online reputation management is

Protect Your Brain - . grades k-2. today’s objectives. learn what your brain does. learn why protecting your brain

Protect your data - What will happen if you keep on using your computer for way too long? of course at some point or

Protect Your Identity - . brian jarrell. if someone steals your social security card number, you can place an “initial

7 Expert Tips to Protect Your Online Reputation - There are plenty that they would help you to know about, including

Writing a Will Online to Protect Your wealth - Why need of a will? writing a will ensures that your property goes into