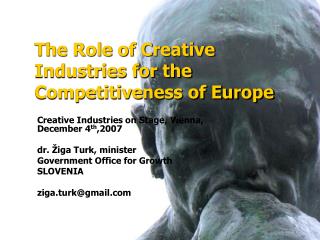 The Role of Creative Industries for the Competitiveness of Europe The Role of Creative Industries for the Competitiveness of Europe

Multiannual Financial Framework - . update on the multiannual financial framework and funding programmes 11 may 2012.

PRESENTATION ON TOWNS AND URBAN AGGLOMERATIONS - . the present set of results pertain to data collected in the census