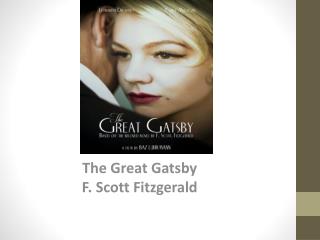 The Great Gatsby F. Scott Fitzgerald . Character Analysis: Nick Carraway . 29-30 Yale Grad Cousins with Daisy and Tom Narrator of the story Comes of age (loss of innocence) Moral compass of the novel Conflicted both about Daisy and Gatsby and Tom and Myrtle

The Great Depression - . from boom, to bust, to dust…. timer. ranking the causes. stock market crash of the great

How Great Thou Art - . o lord, my god, when i in awesome wonder consider all the worlds thy hands have made. i see the

GREAT GATSBY JEOPARDY - . reminder i need your books by friday or you will be charged for them your post secret is due

The significance of water in The Great Gatsby - The great